It's hard to overstate how much I love this poem. Read more Tara Skurtu here.

Thigh-high weed grass in the front yard.
Scarves of Spanish moss, a spray-painted
anarchy sign on the trunk of the thickest oak.

Through a window, crusted dishes in the sink,
stacks of records, a high school watercolor,
blanket on the couch. Everything the way it was.

Through another, the giant happy face
Dad drew on the bedroom wall in Sharpie
to cheer up Amber, still smiling in the dark.

The backyard pool, full of gurgling frogs
and larvae under a land-like sheet of algae.
Mosquitoes humming, thick as dust motes.
Posted by G. M. Palmer at 10:13 AM No comments:

A nature poem for the Spring. As always, see the poems as they come to life on Twitter.


I see
Through leaves
Traced lines
In vines
Of veins
Green skeins
That shift
To lift
The light;
A rite
Not quite
Sacred
But led

From my book With Rough Gods available in paperback and on the Kindle.

On this wet rock you come,
my hair around your waist
in streams like ocean foam;
the pressured salty taste
rests upon my tongue.
As we swallow the night
the morning rises stung
and stained with our delight.
Here in this temple crows
are swelling from the altar
screaming the holy vows
I promised I would keep.
I have done much more than falter
and vengeance never sleeps.
Posted by G. M. Palmer at 2:47 PM No comments:

Next to my own skin, her pearls. My mistress
bids me wear them, warm them, until evening
when I´ll brush her hair. At six, I place them
round her cool, white throat. All day I think of her,

resting in the Yellow Room, contemplating silk
or taffeta, which gown tonight? She fans herself
whilst I work willingly, my slow heat entering
each pearl. Slack on my neck, her rope.

She´s beautiful. I dream about her
in my attic bed; picture her dancing
with tall men, puzzled by my faint, persistent scent
beneath her French perfume, her milky stones.

I dust her shoulders with a rabbit´s foot,
watch the soft blush seep through her skin
like an indolent sigh. In her looking-glass
my red lips part as though I want to speak.

Full moon. Her carriage brings her home. I see
her every movement in my head.... Undressing,
taking off her jewels, her slim hand reaching
for the case, slipping naked into bed, the way

she always does.... And I lie here awake,
knowing the pearls are cooling even now
in the room where my mistress sleeps. All night
I feel their absence and I burn.
Posted by G. M. Palmer at 1:33 PM No comments:

A poem on my 36th Birthday.

This poem originally appeared at the incredibly awesome Fried Chicken and Coffee.

The night sweats through the humidity,
our humanity exhausted on the porch
collapses from the draw of breath
through the thick Autumn air.
Steam and mosquitoes, blood and bile
are mingling with the mist
of burning crosses, churches, forests
as our spirits are paved under
by carpetbagging revenuers
who worship at the font of progress
while drowning our children in the water
meant for the improvement of man.

The morning breaks at eighty degrees
as the sun strains through ancient oaks.
Pavement gravestones
mark the memories of generations
blanketed in tar and steel and concrete
over the coquina sands of our ancestors
fed by the silent Aucilla and cacophonous swamps.
Old men cypresses are slaughtered for clocks,
their knees cut out from under them, choking
as their blood is leeched for another suburb
where timed rain beats the four o’ clock downpour,
and waters the evergrowing asphalt.

The day beats in volcanic reality,
smothering all intention and thought.
The freoned tinted castles lord on,
the strapped Earth begging for a hurricane
more crafty than the newest building codes,
they continue in their oblivion
as the alligator stalks the cul-de-sac for another poodle,
and another child swims for the final time
as the marcite reflects the sun onto his face,
waiting for mommy to return, arms full of bags
to wonder where the housekeeper has gone
as her favorite soaps blast into the windows.

The evening drifts up from the glazed streets
after cars disappear into cement caves.
Bare feet step out into drying sand
to pick ripe tomatoes for dinner.
The sun sinks behind Spanish moss
and a last ray dances through Depression glass
to kiss the simple ring that reaches over the stove
to the spices that will kiss the wrinkled recipe
that has defied the swell of the growing years
and retains the taste of sinking into the freshest dreams.
Every native who has loved the soil and the salt
prays for peace with each day’s passing.

I'm posting a poem I teach every day of National Poetry Month.

Chairs root. Their trunks are runged with snow.
Curtains grow velvet thick, like bark,
in this warm landscape ringed with dark.
Is passion only revelry?

Voices believe words and move free;
lust moves our lips; blood fills our skin.
We bend alive around cup and cloud.
These are the hours to revel in.
Posted by G. M. Palmer at 10:02 AM No comments:

My second of 30 poems for National Poetry Month.

Mere doubt cows you
Fouled in fair skin
As if sin could rend
Or wend you away
From love. Still I pray this
Palmer's kiss is clear: stay.

Finally each day of National Poetry Month I'll be posting one of my own, previously published poems.
"Wedding Spring" was commissioned for the wedding of two dear friends and published by Burlesque Press.

Go now, together, with lives tied,
newborn curates of the long road,
lover cleaved from lovers, laughter of
ancient self-slaughter shaped to the shared
flame of a twisted, braided wick.

Kindle no anger overnight;
together sacrifice pride to love.
Into one house, account, accord,
one word pour all your work—make your
tongue speak now only of life: love.

And when the necessary trials
burn the rings of your concurrent hearts
upon your fingers, don’t fall into
yourselves but fall into each other;
alone now always means together.

Forget your fights from the final word;
forgotten years will rise before your
faults will wear themselves away
and sooner will unsought conversion
come than love to a mnemonic heart.

To years—to springtimes, summers, autumns,
winters—to all those spinning seasons
ending where you have here begun:
love; to the perfect knowledge love is
reborn each morning you are one.

Go, newborn lover, ancient flame:
kindle together into one tongue
and burn upon yourselves, alone;
forget forgotten faults, and come

In addition to posting a twitter poem daily for National Poetry Month, I'll also be posting a selection of the poems I teach. Here's the first; probably the first poem that was important to me:

Nobody in the lane, and nothing, nothing but blackberries,
Blackberries on either side, though on the right mainly,
A blackberry alley, going down in hooks, and a sea
Somewhere at the end of it, heaving. Blackberries
Big as the ball of my thumb, and dumb as eyes
Ebon in the hedges, fat
With blue-red juices. These they squander on my fingers.
I had not asked for such a blood sisterhood; they must love me.
They accommodate themselves to my milkbottle, flattening their sides.
Overhead go the choughs in black, cacophonous flocks—
Bits of burnt paper wheeling in a blown sky.
Theirs is the only voice, protesting, protesting.
I do not think the sea will appear at all.
The high, green meadows are glowing, as if lit from within.
I come to one bush of berries so ripe it is a bush of flies,
Hanging their bluegreen bellies and their wing panes in a Chinese screen.
The honey-feast of the berries has stunned them; they believe in heaven.
One more hook, and the berries and bushes end.
The only thing to come now is the sea.
From between two hills a sudden wind funnels at me,
Slapping its phantom laundry in my face.
These hills are too green and sweet to have tasted salt.
I follow the sheep path between them. A last hook brings me
To the hills’ northern face, and the face is orange rock
That looks out on nothing, nothing but a great space
Of white and pewter lights, and a din like silversmiths
Beating and beating at an intractable metal.

Since April is National Poetry Month, I'll be contributing a poem a day on Twitter.

Of course I will repost them here as well.

What I'm Listening To: Sivert Høyem's "Where's My Moon"

Email ThisBlogThis!Share to TwitterShare to FacebookShare to Pinterest
Labels: Around the Internet, Music, What I'm Listening To

I had to read the article titled "Peacekeepers Kill Civilians. . ."

When words don't mean what they mean how do you write poetry?
Posted by G. M. Palmer at 11:00 AM No comments:

Email ThisBlogThis!Share to TwitterShare to FacebookShare to Pinterest
Labels: Around the Internet, war, world events

So at Prufrock Coffee (best coffee shop name ever?), there's this display from Ariadne Radi Cor. 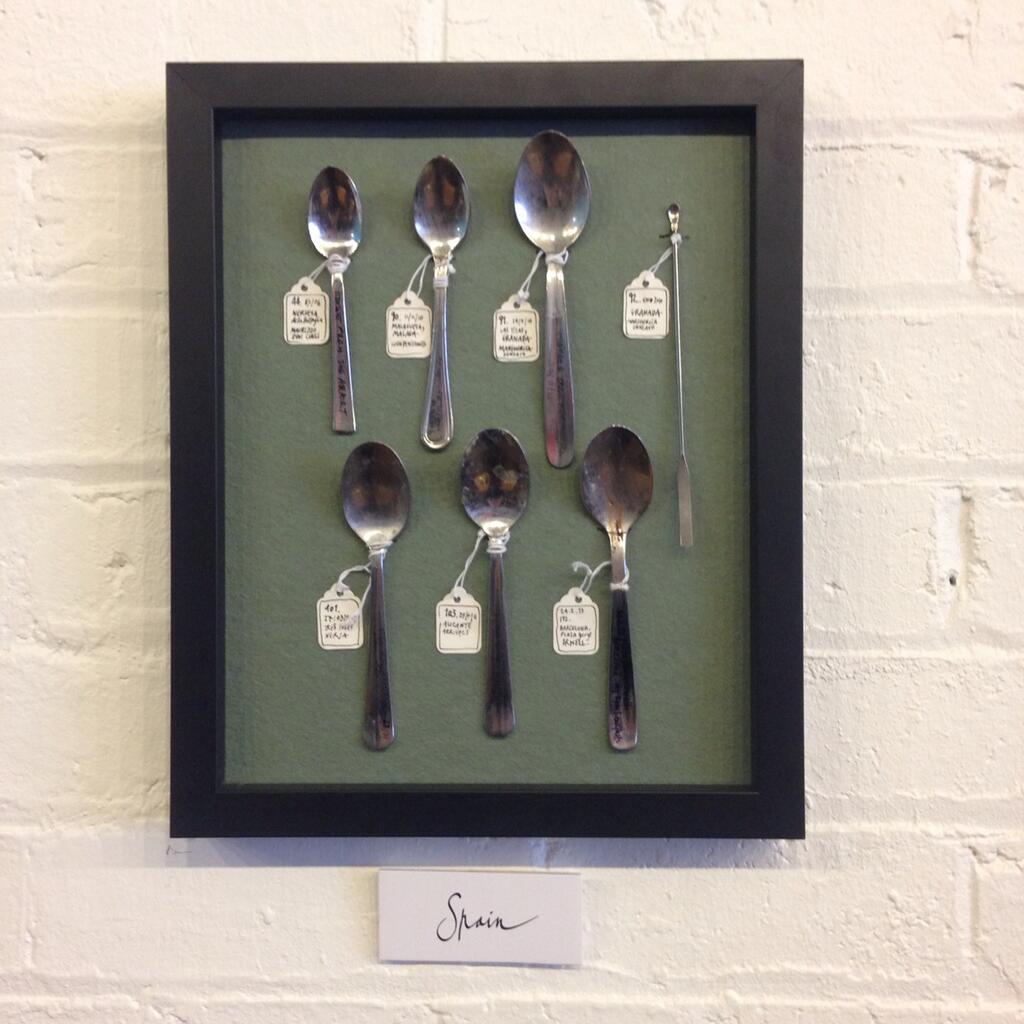